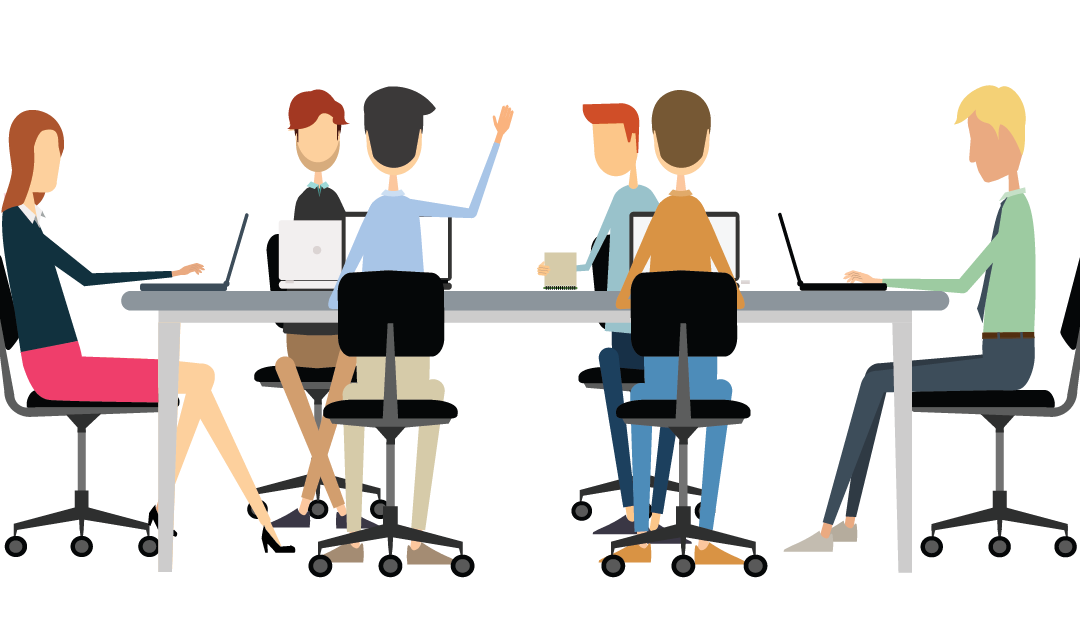 Standing in front of a group of employees, the last thing that you want is to see eyes rolling, hear exasperated sighs and feel overwhelming discouragement from a disgruntled audience. Unfortunately, this reception is not unusual during workplace meetings and presentations. Although there are different reasons for these reactions from your audience, there are some consistent reasons that employees simply don’t like meetings.

The following graph is from the November/December 2018 issue of SHRM (Society for Human Resource Management) Magazine, and lists seven of those common meeting complaints. Knowledge is power, and with some foresight you can combat each of these complaints for a successful meeting and more receptive audience. 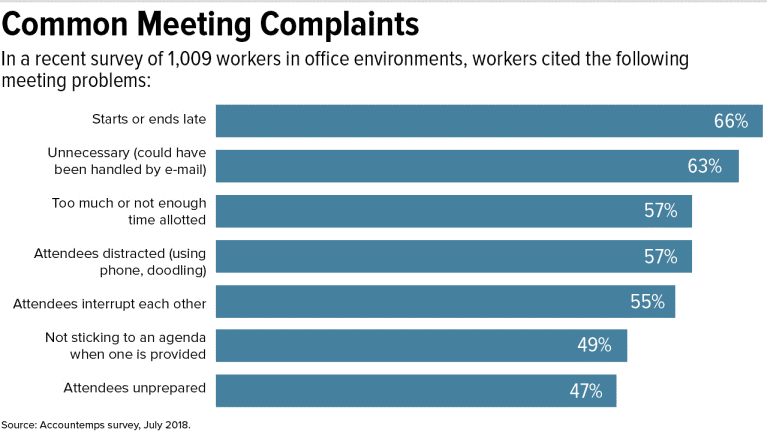 Starts or ends late (66%): At 66%, this is a very common complaint. As far as starting late, the solution is fairly obvious—prepare in advance and get to the meeting’s location at least 15 minutes early to set up. In addition, don’t wait for tardy employees to arrive. Waiting for one or two people may seem like the courteous thing to do, but in reality, you are being inconsiderate of all of the other employees who planned accordingly to be on time. Starting on time will keep you on schedule, ultimately helping to ensure that the meeting ends on time.

Unnecessary (63%): We have all left meetings questioning why the information discussed wasn’t sent out in an email, saving everyone in attendance valuable time. To combat this complaint, create a detailed agenda and determine if you are just relaying information or if input is necessary. If you need group feedback or are hoping for a productive discussion, absolutely call a meeting; however, if you are just going over facts and figures, send it in an email.

Too much or not enough time allotted (57%): A well thought out agenda is one way to stick to your allotted time frame. After you have created an agenda, estimate how much time each area will take during the meeting. Plan accordingly, share the agenda in advance so that attendees know what to expect and stick to that agenda during the meeting.

Attendees distracted (57%): With all of the technology that we have at our fingertips, smartphones are often the biggest distraction during meetings. If you have noticed a trend of attendees paying more attention to their phone than the presentation or discussion, implement a policy that bans phones during meetings. Although you may experience some backlash from tech addicted attendees, requesting that phones are left at desks or placed in a drop box will likely improve both attention and participation.

Attendees interrupting each other (55%): This complaint is typically specific to the personalities of the meeting’s attendees; after all, some coworkers are just more prone to interrupting their peers. Combatting this complaint can be as easy as encouraging an individual whose thought was cut off to continue before additional feedback is given. Lead by example and give the person speaking the floor, it may take time but the chronic interrupters will get the hint.

Not sticking to an agenda when one is provided (49%): Discipline, organization and focus are key to sticking to an agenda. It can be easy to go off on tangents, making it necessary to hold each other accountable during meetings and refer back to the agenda frequently. If necessary, create an “idea parking lot”, also known as a list of topics to talk about should the meeting run short or to be covered at a later date. The act of physically writing down this list will make the audience feel heard, but will keep you on track to cover everything on the agenda.

Attendees unprepared (47%): Did you think that you were the only one that should be expected to be prepared? Think again. Unprepared attendees are a distraction to others at the meeting. To combat this complaint, raise the bar and set your expectations high. Let employees know that you expect them to be on time, have already reviewed the agenda and are ready to take notes or participate at the scheduled time.